My Other Cycle Touring Blogs

Had a bit of a dodgey belly so had a couple of runs to the loo, then put some air in my tyre and the valve broke so had to change the tub.  The GPS wouldn't work so we headed out a couple of km further than we needed.  Not the best start.

All went well for a while on nice back roads, then we hit a dual carriageway but as it wasn't far we decided to stick to it.  Just s well as it started raining then pouring with a good dose of thunder and lightning.

The road turned to crap as we hit a long stretch of road works before finally turning to dirt.  How can you go from lovely smooth tarmac to a bumpy mud track in 10km on a main road??  When we got to the town the hotels were all on the other side of 6 lanes of fast moving traffic, nothing is going smoothly today.

We finally found a fly over and a hotel that didn't just do rooms by the hour!  As it turns out we could of easily crossed over Thai style and just ridden down the wrong side of the road like they do.  It would have saved 4km, I guess the rain must damped my brain.

Tomorrow Bangkok, should be an interesting ride!! 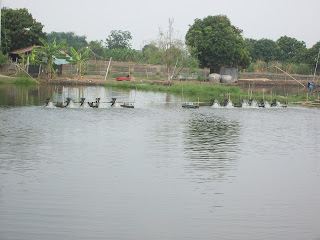 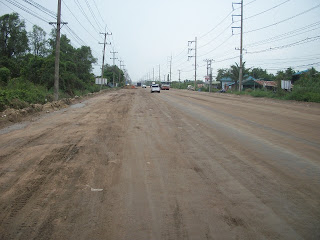 This was a tarmac dual carriageway before it turned into this
Posted by Grifff at 06:35